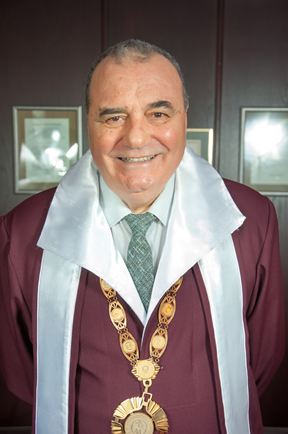 In 2019 we celebrate the 102nd anniversary of the Medical University – Sofia and the 77th anniversary of the Faculty of Dental Medicine.
Nowadays we are in the second century from the foundation of MU – Sofia and it is time to strike the balance of the professional road we have travelled, analyse the present and look into the future. As long as our profession exists, let us always remember that:
Vasil Argazov had a permit № 1 issued for „free practice of the art of dentistry….” In Bulgaria on 25.06.1880.
Friedrich Karl Flämmich, who was born in Prague – in the Czech Republic passed an exam for dentist in the Kiev University „Saint Vladimir”, in 1869. He was the first dentist that in order to get the right to practice in Rousse (later on he got relocated to Sofia) to pass a colloquium under the Public health Protection Act that was effective back then. Friedrich Flämmich bestowed his library and museum collection to the Bulgarian Dental Association. Small part of the exhibits donated by him were preserved and placed inside the dental medicine museum in the Faculty of Dental Medicine, Medical University – Sofia which was revived in honour of the 70th anniversary, in the end of 2012. The museum is named after Friedrich Karl Flämmich, may his memory live forever.
On the 20th of December 1905 in the small salon of „Slavyanska beseda” in Sofia they opened the First congress of Bulgarian dentists. The First Bulgarian Odontological (Dental) Association (FBO(D)A) was founded by 19 colleagues.
On the 4th of July 1910 on the IV regular congress of FBO(D)A they passed the historical resolution on renaming it to Bulgarian Dental Association, following the suggestions made by its chairman Friedrich Karl Flämmich.
Back in 1906 for the first time they requested permit to found Dental Institute (institute of higher education) in Bulgaria.
In the end of 1920 the Management Board of the Bulgarian Dental Association presented to the attention of the Minister of people’s culture and education detailed exhibition on the need of establishing dental school „that will put the beginning of the Bulgarian dental science…”.
In 1921 during a session of the Minister of culture and education together with representatives of the Bulgarian Dental Association and the Medical faculty they arrived to the following resolution:

The present short historical balance shows that in the past 77 years the tuition in dentistry-stomatology-dental medicine in our country kept developing in the upwardly right direction. Thanks to the refurbished clinical and preclinical tuition halls and 4 aulas in the Faculty of Dental Medicine, Medical University – Sofia, of which 2 are new, with the highly professional lecturers of whom 17 professors, 28 associate-professors, 20 assistant-professors and 64 assistants, with the inquisitive Bulgarian and foreign students, we could take a confident look at our future development. Let it be known, that the 77-years Bulgarian school in dental medicine combines the best of the Western and Eastern Europe and creates in our scholars quite the solid base of theoretical knowledge in human and dental medicine and sustainable practical skills in the 6-year (12-semester) tuition in dental medicine. Every doctor in dental medicine who has graduated the Faculty of Dental Medicine, Medical University – Sofia in Bulgaria could undertake by him/herself the basic operations from the first day of his or her professional career. Let destiny be merciful towards all these around 1500 Bulgarian and foreign students in their realization in  our favourite profession.